Cigars gotten lots of good press in the 90’s. Many celebrities started smoking cigars in the 90s and the bad press of the cigarette companies have the dubious effect of making cigar companies look good by comparison. Nonetheless, the 1989 US Surgeon general’s report had plenty to say about the health hazards of cigars: 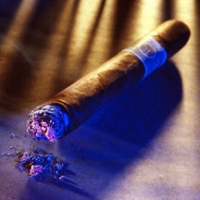 Deaths from all types of cancer among men who smoke cigars are 34 percent higher than among nonsmokers.

Most of the same cancer-causing chemicals that are found in cigarettes are present in cigars too.

Generally, users of tobacco of all types – cigarettes, cigars, pipes, and smokless tobacco – are 5 to 10 times more likely to get mouth or throat cancer than nonsmokers are.

The Coalition for Accountability says that cigar smokers are 3.6 times more likely than nonsmokers to die from chronic obstructive pulmonary disease, a disease, such as emphysema or chronic bronchitis, that interferes with the workings of the lungs.

Cigar smokers are particularly at risk of cancer of the mouth, esophagus, or larynx (voice box); they are 4 to 10 times more likely than nonsmokers to get one of those types of cancer.