The First Europeans to use tobacco were sailors. 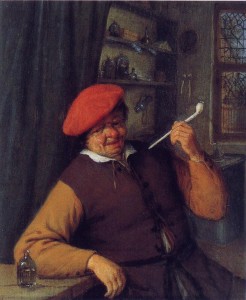 In earlier times, tobacco was called herba panacea- meaning cure-all herb. Some people even believed that smoking cleaned out the lungs.

Several Countries outlawed tobacco use in the 1600s. In Turkey during that period, tobacco users could be tortured or killed. In China, a person caught with tobacco might be beheaded. In Russia, tobacco users who were caught a second time were killed.

Tobacco was extremely important to Spain and the American colonies. It was a major crop and became so valuable that it could be used in place of money. People in Virginia planted it in every square of soil they could find. In fact, the Virginia Company, which sponsored the early colony, had to pass a law requiring people to grow food also, and not just tobacco.

Until the 1700’s, pipe smoking was the preferred method of tobacco use. Then people began using dry snuff or chewing tobacco instead. By the 1800’s, cigarettes became more fashionable but had to be rolled by hand and were extremely expensive.

The first report to link smoking to certain diseases was published in 1859.

Thomas Edison and Henry Ford both declared tobacco use should be banned.

After World War I, a group of tobacco companies banded together and denied that tobacco causes any harmful effects.

In the 1920’s, the makers of Lucky Strike Cigarettes wanted to appeal to women who were watching their weight by using the slogan “Reach for a Lucky instead of a Sweet”

During World War I and World War II, soldiers were given cigarettes as part of their rations.