What is a Hookah and Shisha?

• A hookah is a water pipe used to smoke tobacco through cooled water. The 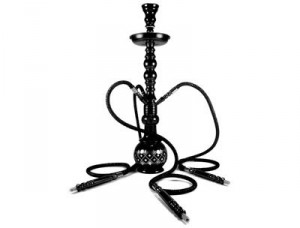 tobacco is heated in the bowl at the top of the hookah and the smoke is filtered through the water in the base of the hookah. Hookah is used to smoke specially made tobacco that is available in a variety of flavors (e.g., apple, mint, cherry, chocolate, coconut, licorice, cappuccino, and watermelon). • Alternate names for hookahs include: water pipe, goza, hubble-bubble, borry, rhile, and narghile. • Shisha is the tobacco smoked in a hookah. It is a very moist and sticky tobacco that has been soaked in honey or molasses. • Hookahs originated in ancient Persia and India and have been used extensively for centuries. Today, hookah cafés are gaining popularity around the globe, including Britain, France, Russia, the Middle East, and the United States.1 An estimated 300 hookah cafés operated in the United States in 2006, and the numbers continue to grow.1 In recent years, there has been a increase in hookah use around the world, most notably among youth. • A typical modern hookah comprises a head (with holes in the bottom), a metal body, a water bowl, and a flexible hose with a mouthpiece.

Myths and the Truths

MYTH #1: Hookah smoke is filtered through water so it filters out any harmful ingredients. TRUTH #1: Smoking tobacco through water does not filter out cancer-causing chemicals. Water-filtered smoke can damage the lungs and heart as much as cigarette smoke.

MYTH #4: Smoking a hookah is not as addictive as smoking a cigarette because there is no nicotine. TRUTH #4: Just like regular tobacco, shisha contains nicotine. In fact, in a 60-minute hookah session, smokers are exposed to 100 to 200 times the volume of smoke inhaled from a single cigarette.

MYTH #6: Shisha tobacco contains fruit, so is healthier than regular tobacco. TRUTH #6: Tobacco is tobacco, no matter how you look at it. Shisha is often soaked in molasses or honey and mixed with fruit, but it still contains cancer-causing chemicals and nicotine. Stick to traditional methods of getting fruit—eat an orange.

• Compared to a single cigarette, hookah smoke is known to contain: • Higher levels of arsenic, lead, and nickel1 • 36 times more tar • 15 times more carbon monoxide • Smoking a hookah requires taking longer and harder drags, increasing levels of inhaled nicotine and carcinogens in the lungs. • The longer the hookah session, the more nicotine and toxins one takes in. • A 45 to 60 minute hookah session exposes the smoker to approximately the same amount of tar and nicotine as one pack of cigarettes. • Sharing mouthpieces without washing them can increase the risk of spreading colds, flu, and infections—even oral herpes. • Health risks of smoking hookahs include cancer, heart disease, lung damage, and dental disease. • Do not think that if you are just visiting a hookah bar, that you are in the clear. There are still high levels of damaging secondhand smoke to all who are present.

Other Health Effects of Hookah Smoke

One response to “Hookah tobacco facts”