The tobacco industry is one of the most profitable and deadly industries in the world with the global cigarette business valued at $559.9 billion USD. The World Health Organization estimates that the tobacco epidemic could kill one billion people during the 21st century, with the majority of those deaths occurring in developing countries.2 The international tobacco market is dominated by five major transnational tobacco companies (TTC), which sell their lethal products in markets around the world: China National Tobacco 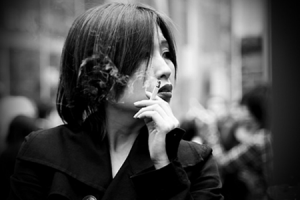 Company (CNTC), Philip Morris International (PMI), British American Tobacco (BAT), Japan Tobacco Inc (JT), and Imperial Tobacco. Japan Tobacco Inc (JT) is a Japanese tobacco company that is 50 percent owned by the Japanese government.JT’s headquarters are in Tokyo, Japan. Besides tobacco, JT also has interests in pharmaceuticals, food and other business sectors. However, the driving force behind JT’s profits and growth is its domestic and international tobacco sales. JT manufactures, markets, and sells its products internationally through Japan Tobacco International (JTI). JTI is headquartered in Geneva, Switzerland. JTI was originally established in 1999 after JT acquired R.J. Reynolds’ international tobacco sector for $8 billion USD. In 2007, JTI’ operations were expanded through the acquisition of Gallaher Group.

JT is the third most profitable publicly traded tobacco company following PMI and BAT. JT’s total net profits for March 2009-March 2010 were 138 billion Yen ($1.67 billion USD), driven mainly by a combination of international and domestic cigarette sales. Despite its large profits for the 2009 fiscal year, JT’s domestic cigarette sales have been on the decline. In order to offset decreased domestic profits, JT continues to aggressively expand its international tobacco business through JTI. In 2009, JTI sales surpassed the domestic cigarette business and became JT’s main source of revenue.9 During 2008, JTI was the first or second leading tobacco business in eleven major markets, including Russia, Ukraine, Japan and the United Kingdom.

Cigarette Volumes by Region Market research firm, Euromonitor International, notes that the demand for tobacco products domestically in Japan is on the decline as a result of several factors including a more health conscious public, increased smoke-free regulations, and an aging Japanese population. These reasons, as well as the global economic downturn, can also be applied to many other overseas markets and attribute to the overall decline in sales volume internationally. The European Union (EU) and the Commonwealth of Independent States (CIS)‡ are two regions that are important contributors to the company’s financial strength. Of the top 18 international markets where JTI operates, eight are in Western Europe. Sixteen percent of JTI’s operating income is from the United Kingdom, while the rest of Europe adds another 22 percent to its operating income. As such, a total of 38 percent of JTI’s operating income comes from the EU.

Presence in Emerging Markets In 2009, 68 percent of JTI’s volume sales came from emerging markets. Emerging markets in the CIS region produce close to half of the company’s international volume sales (49.3%). JTI’s success in the CIS region is due mainly to acquisitions and to its aggressive marketing of the Winston brand. In Russia, JTI has increased its operating profit over the last few years through a mix of volume growth and the rising prices in cigarettes faster than in any other major tobacco-consuming country.10 In 2011, JTI aims to expand its sales in the Middle East, North Africa and Russia.

Global Branding Strategy International brands increase a tobacco company’s sales volume globally because of their appeal to younger smokers. As one tobacco industry strategist reported, it is important for international brands to win “high penetration among young adult smokers, as success in this segment confirms a brand’s image as ‘younger’ and ensures longer-term usage of the brand by those consumers.” JTI focuses heavily on promoting international brands globally. For example, after acquiring RJ Reynolds’ international tobacco business in 1999, JTI significantly changed the packaging of Camel cigarettes. The goal of the redesign was to make the packaging more consistent across markets to increase customer loyalty and make the brand more recognizable globally.

As a result of the acquisition of Gallaher in 2007, JTI more than doubled the number of global cigarette brands from three to eight by adding Benson & Hedges, Glamour, LD, Silk Cut and Sobranie to the company’s brand portfolio that already included Winston and Camel (from the RJ Reynolds international tobacco arm acquisition), and Mild Seven (an original JT brand). These brands combined comprise 50% of JTI’s global tobacco sales by volume. JTI’s global positioning is based mainly on what the company classifies as its global drive brands, Winston and Camel. Winston is the second most popular cigarette brand sold globally behind only PMI’s Marlboro.1 Winston is also the market leader in Eastern Europe and the second most popular brand in Western Europe. Camel also has a strong presence in Western

Europe and an emerging presence in Latin America.JT’s Mild Seven – sold in Japan by JT and internationally by JTI – is another strong brand for the company. The brand is the third largest globally with sales concentrated in Asia. In the coming years, JTI plans to spend $100 million USD a year on marketing its global flagship brands to continue expanding its international customer base.

Marketing to Women • In an attempt to take advantage of growing female smokerpopulations, JTI launched the Glamour brand. Glamour cigarettes are a line of super-slim cigarettes launched first in Russia, Ukraine, and Kazakhstan. This product was introduced as a competitor to BAT’s popular Vogue cigarettes.21 Glamour cigarettes are clearly targeted towards women, as shown in the use of pink and feminine graphics.