Khat contains the alkaloid called cathinone, an amphetamine-like stimulant which is said to cause excitement, loss of appetite and euphoria. In 1980 the World Health Organization classified khat as a drug of abuse that can produce mild to moderate psychological dependence. The plant has been targeted by anti-drug organizations like the DEA. It is a controlled/illegal substance in many countries.

For centuries, khat, the fresh young leaves of the Catha edulis shrub, have been consumed where the plant is cultivated, primarily in East Africa and the Arabian peninsula. There, chewing khat predates the use of coffee and is used in a similar social context. Khat has been brought into the United States and other countries for use by emigrants from the source countries. It contains a number of chemicals among which are two controlled substances, cathinone and cathine. As the leaves mature or dry, cathinone is converted to cathine, which significantly reduces its stimulatory properties.

Methcathinone, commonly called cat, is occasionally confused with khat. Methcathinone is a synthetic Schedule I substance that has a similar chemical structure to the cathinone in the khat plant. Methcathinone is produced in clandestine laboratories and sold as a methamphetamine alternative. The addictive properties and side effects of this synthetic are more intense than either of the naturally occurring khat substances. 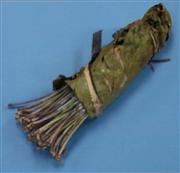