Kretek are cigarettes made with a complex blend of tobacco, cloves and a flavoring ‘sauce’. The word “kretek” itself is an onomatopoetic term for the crackling sound of burning cloves.

Haji Jamahri, a resident of Kudus, Java, created kreteks in the early 1880s as a means to deliver the medicinal eugenol of cloves to the lungs, as it was thought to help asthma. It cured his chest pains and he started to market his invention to the village, but he died before he could mass market it. M. Nitisemito took his place and began to commercialize the new cigarettes. Today, kretek manufacturers directly employ over 180,000 people in Indonesia and an additional 10 million indirectly.

Partly due to favorable taxation compared to “white” cheap cigarettes, kreteks are by far the most widely-smoked form of cigarettes in Indonesia, where about 90% of smokers usually smoke kreteks. In Indonesia, there are hundreds of kretek manufacturers, including small local makers and major brands. Most of the widely-known international brands, including Bentoel, Djarum, Gudang Garam, Jakarta, Sampoerna, Dji Sam Soe, and Wismilak, originate from Indonesia. Nat Sherman of the United States produces cigarettes branded as “A Touch of Clove” but are arguably not kreteks since they contain clove flavoring in the filter rather than actual clove spice mixed with the tobacco. 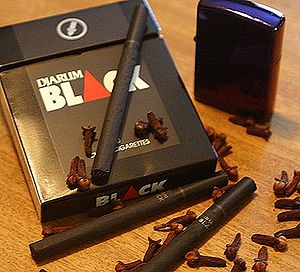 The quality and variety of tobacco play an important role in kretek production. One kretek brand can contain more than 30 types of tobacco. Minced dried clove buds weighing about 1/3 of the tobacco blend are added. This new blend is then flavored with a