Addictions are largely problems of people who begin smoking, drinking or using other drugs before age 21, according to a report published Wednesday by the National Center on Addiction and Substance Abuse at Columbia University.

Graphic anti-smoking labels are coming to a tobacco retailer near you. But will it matter to tobacco companies’ profits?

THE European Union has raised concerns about moves to introduce plain packaging for cigarettes, at World Trade Organisation forums in Geneva.

Reducing illegal tobacco sales to minors to an all-time low

Posted on June 29, 2011 | Leave a comment
A new report on the Synar Amendment program — a federal and state partnership aimed at ending illegal tobacco sales to minors — shows that all the states and the District of Columbia have continued to meet their goals of curtailing sales of tobacco to underage youth (those under 18). The report by the Substance Abuse and Mental Health Services Administration (SAMHSA) which sponsors the Synar program shows that the average national retailer violation rate of tobacco sales is down to 9.3-percent — the lowest level in the 14 year history of the program.
The Synar Amendment (introduced by the late Representative Mike Synar of Oklahoma and enacted as Section 1926 of the federal Public Health Service Act) requires states and U.S. jurisdictions to have laws and enforcement programs for prohibiting the sale and distribution of tobacco to persons under 18. The program is part of SAMHSA’s strategic initiative on preventing substance abuse and mental illness.
Under the regulation implementing the Synar Amendment, states and U.S. jurisdictions must report annually to SAMHSA on their retailer violation rates, which represent the percentage of inspected retail outlets that sold tobacco products to a customer under the age of 18.
Over the last 14 years, data reported by states and the District of Columbia has indicated a clear downward trend towards reducing tobacco sales to minors. The exception was in FY2009 when the average national retailer violation rate of tobacco sales to minors increased from 9.9-percent in FY2008 to a rate of 10.9-percent. In FY2010, however, the downward trend returned as the national average rate decreased significantly to 9.3- percent.
For the fifth year in a row no state was found out of compliance with the Synar regulation — in fact:
These rates continue to stand in sharp contrast with the situation 14 years ago at the Synar program’s inception when the highest reported state retailer violation rate was 72.7-percent.
“This report brings welcome news about the measurable progress states have made in reducing illegal sales of tobacco to minors,” said SAMHSA Administrator Pamela S. Hyde, J.D. “Reducing access to tobacco products is only one part of the equation. Progress in reducing actual tobacco use among young people has stalled. Putting into place new prevention efforts that reach youth in meaningful ways can go a long way toward eliminating the health risk of tobacco use.”
According to the report, although the cutbacks in state enforcement programs due to the economy and budget reductions may have put the effectiveness of some state programs in jeopardy a number of other factors may have helped sustain and strengthen them.
One important factor was the enactment of the Family Smoking Prevention and Tobacco Control Act, which was signed into law by President Obama on June 22, 2009. Under this law the Food and Drug Administration (FDA) contracts, to the extent feasible, with states and U.S. territories to carry out compliance check inspections of retailers in connection with the enforcement of the Act including enforcement of the new Federal youth access regulations. To date, FDA has entered into contracts with 15 states and is expected to continue contracting with others in the months to come.
SAMHSA and FDA continue to collaborate to ensure that their programs work effectively together to help reach the shared goal of eliminating sales of tobacco to underage youth.
The FY2010 Annual Synar Reports: State Compliance, which includes compliance rates for each of the states and the District of Columbia, as well as a section on compliance rates for the U.S. Jurisdictions, is available at http://www.samhsa.gov/prevention/synar.aspx. For related publications and information, visit http://www.samhsa.gov/.
For more information about the FDA’s regulations restricting the sale and distribution of tobacco products to youth, visit: http://www.fda.gov/TobaccoProducts/ProtectingKidsfromTobacco/

The Food and Drug Administration is conducting an independent review of research on the public health impact of menthol cigarettes – which are mint flavored and one of the few growth sectors of the shrinking cigarette business.

Philip Morris International Inc. (PM), the world’s largest publicly traded tobacco company, said an Australian proposal requiring cigarettes to be sold in plain packages violates a treaty with Hong Kong and may cause billions of dollars in damages.

JEFFERSON CITY, Mo. — A proposed Missouri ballot measure poses the question: Should a $1 per pack tax be imposed on cigarettes made “by certain tobacco product manufacturers?”

Menthol Cigarette Investigation to be Conducted by FDA

A menthol cigarette independent review is part of the Food and Drug Administration’s latest investigation into the public health impact of cigarettes. 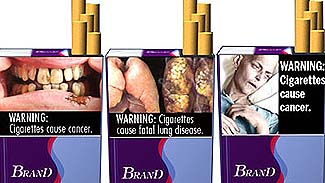 speech, as opposed to being one of prohibited speech. The case precedents in this area go back to the 1940s in purely political contexts as opposed to commercial speech.