A mushroom is the fleshy, spore-bearing fruiting body of a fungus, typically produced above ground on soil or on its food source. The standard for the name “mushroom” is the cultivated white button mushroom, Agaricus bisporus, hence the word mushroom is most often applied to those fungi (Basidiomycota, Agaricomycetes) that have a stem (stipe), a cap (pileus), and gills (lamellae, sing. lamella) on the underside of the cap, just as do store-bought white mushrooms.

Forms deviating from the standard morphology usually have more specific names, such as “puffball”, “stinkhorn“, and “morel“, and gilled mushrooms themselves are often called “agarics” in reference to their similarity to Agaricus or their placement in the order Agaricales. By extension, the term “mushroom” can also designate the entire fungus when in culture or the thallus (called a mycelium) of species forming the fruiting bodies called mushrooms, or the species itself. 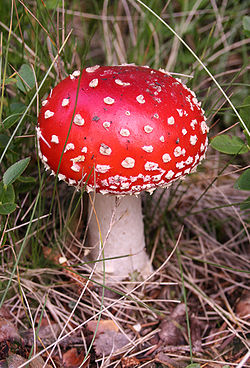 Short-term effects Once ingested, mushrooms generally cause feelings of nausea before the desired mental effects appear. The high from using magic mushrooms is mild and may cause altered feelings and distorted perceptions of touch, sight, sound and taste. Other effects can include nervousness and paranoia. Effects can be different during each use due to varying potency, the amount ingested, and the user’s expectations, mood, surroundings, and frame of mind. On some trips, users experience sensations that are enjoyable. Others can include terrifying thoughts, and anxiety, fears of insanity, death, or losing control.

Long-term effects Some magic mushroom users experience “flashbacks”, or hallucinogen persisting perception disorder (HPPD), which are reoccurrences of hallucinations long after ingesting the drug. The causes of these effects, which in some users occur after a single experience with the drug, are not known.

One response to “Mushrooms”