The Gov is expecting legal challenges over plain cigarette pack and has warned they could cost more then $6 million. Associate Health Minister Tariana Turia announced the Gov would push ahead with plans to introduce standard and unbranded packs with large health warnings for tobacco products. 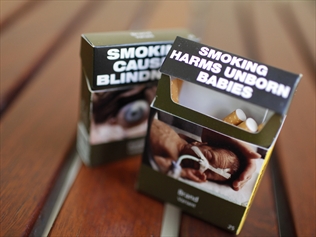 The plan would make New Zealand the second one after Australia to introduce packaging, but the gov will become vulnerable to legal challenges and similar to those across the Tasman. Ms Turia said Ministry of Health officials would begin policy work immediately, but any changes would not be implemented until the conclusion of a World Trade Organization dispute over Australia’s introduction of plain packaging.

Ms Turia expected that could be completed within 18 months. But the Government was likely to face legal challenges even if Australia won the WTO case – and Ms Turia said fighting off those challenges could cost taxpayers $3-$6 million. Despite that, she was confident plain packs could be on shelves as soon as next year. “We know that we’ve got trade obligations and we take them seriously … but we are confident that plain packaging can be introduced consistently with those obligations.”

However, Auckland University trade law expert Professor Jane Kelsey said the packaging changes might not go ahead at all. She said waiting for all of Australia’s legal cases to be concluded would push the Government’s plans well into the next parliamentary term – when National might not have to rely on the Maori Party for support and would be free to abandon the law if it wanted to. As well as the WTO case, Australia is being sued by tobacco giant Philip Morris on the grounds its packaging regime breaches a free trade agreement with Hong Kong.

Dr Kelsey said that process could take five years or more – by which time the tobacco companies would have “a whole new legal canvass on which to play” after the introduction of the Trans-Tasman Partnership Agreement. Chapman Tripp partner Daniel Kalderimis said introducing plain packaging would result in big tobacco firms filing a slew of lawsuits – including potential administrative law challenges based on an alleged lack of consultation.

He said any legal challenges would be pursued vigorously by the tobacco firms, but they would face a complex job proving a breach of trade treaties. British American Tobacco has already signaled it would not rule out legal action. Its New Zealand general manager, Steve Rush, said the Government had been pragmatic in deferring its final decision until all the international trade and legal issues had been resolved.

“While we can’t rule out legal action at this stage, we can say that we will fully participate in the legislative process.” Labour leader David Shearer and health lobby groups are among those in support of the plan. Mr Shearer said it was the right thing to do. “I think it’s a good idea, it will benefit New Zealanders, it will have health benefits, bring down health costs.” Cancer Society spokeswoman Skye Kimura said the main aim was to protect children and tobacco products would no longer be decorated with desirable colors and prominent branding.