Phencyclidine (a complex clip of the chemical name phenylcyclohexylpiperidine, commonly initialised as PCP), also known as angel dust and other street names, is a dissociative drug formerly used as an anaesthetic agent, exhibiting hallucinogenic and neurotoxic effects. Developed in 1926 , it was first patented in 1952 by the Parke-Davis pharmaceutical company and marketed under the brand name Sernyl. In the United Kingdom PCP is a class A drug. In chemical structure, PCP is an arylcyclohexylamine derivative, and, in pharmacology, it is a member of the family of dissociative anesthetics. PCP works primarily as an NMDA receptor antagonist, which blocks the activity of the NMDA receptor. Other NMDA receptor antagonists include ketamine, tiletamine, and dextromethorphan. Although the primary psychoactive effects of the drug last only hours, total elimination from the body is prolonged, typically extending over at least 8 days.

PCP turns up on the illicit drug market in a variety of tablets, capsules, and colored powders. It is normally used in one of three ways — snorted, smoked, or eaten. When it is smoked, PCP is often applied to a leafy material such as mint, parsley, oregano, tobacco or marijuana. Many people who use PCP may do it unknowingly because PCP is often used as an additive and can be found in marijuana, LSD, or methamphetamine. 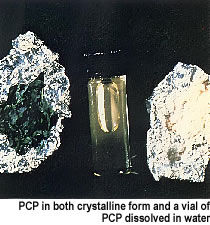 PCP: At low to moderate doses, PCP can cause distinct changes in body awareness, similar to those associated with alcohol intoxication. Other effects can include shallow breathing, flushing, profuse sweating, generalized numbness of the extremities and poor muscular coordination. Use of PCP among adolescents may interfere with hormones related to normal growth and development as well as with the learning process.

At high doses, PCP can cause hallucinations as well as seizures, coma, and death (though death more often results from accidental injury or suicide during PCP intoxication). Other effects that can occur at high doses are nausea, vomiting, blurred vision, flicking up and down of the eyes, drooling, loss of balance, and dizziness. High doses can also cause effects similar to symptoms of schizophrenia, such as delusions, paranoia, disordered thinking, a sensation of distance from one’s environment, and catatonia. Speech is often sparse and garbled.

PCP has sedative effects, and interactions with other central nervous system depressants, such as alcohol and benzodiazepines, can lead to coma or accidental overdose.

Many PCP users are brought to emergency rooms because of PCP’s unpleasant psychological effects or because of overdoses. In a hospital or detention setting, they often become violent or suicidal, and are very dangerous to themselves and to others. They should be kept in a calm setting and should not be left alone.

Formaldehyde (the chemical used in embalming, not in PCP): Short-term exposure to formaldehyde can be fatal; however, the odor threshold is low enough that irritation of the eyes and mucous membranes will occur before these levels are achieved.

PCP: PCP is addicting; that is, its use often leads to psychological dependence, craving, and compulsive PCP-seeking behavior.

People who use PCP for long periods report memory loss, difficulties with speech and thinking, depression, and weight loss. These symptoms can persist up to a year after cessation of PCP use. Mood disorders also have been reported.

Formaldehyde (the chemical used in embalming, not in PCP): Long-term exposure to low levels of formaldehyde may cause respiratory difficulty, eczema, and sensitization. Formaldehyde is classified as a human carcinogen and has been linked to nasal and lung cancer, and with possible links to brain cancer and leukemia.