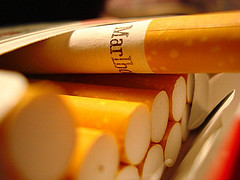 packaging gathered over more than a decade.

The manufacturers behind the cigs4us.biz/marlboro-cigarette, have used Freedom of Information laws to gain access about 6000 confidential interviews undertaken with teenagers as young as 13, which discuss their views on smoking and tobacco.

The interviews, undertaken by the University’s Institute for Social Marketing unit since 1999, formed the basis for two major studies that analysed the negative effects of cigarette packaging and marketing on British youths.

The studies, published in the Journal of Adolescents, the European Journal of Public Health and the Tobacco Control journal, examined why teenagers started smoking and what they thought of marketing by tobacco companies.

Academics said that handing over the information would be a major breach of confidence and could jeopardise future research.

But the company defended its request as entirely legal and legitimate to gain access to information “of interest”.

“We have not been broken any laws. Frankly we have requested some information, legitimately, on an issue that is of interest to us,” one executive told The Daily Telegraph on Wednesday night.

According to the university, Philip Morris’ made requests to gain access to the information in 2009, which was initially refused because it was mady anonymously through its lawyers.

But after another request was lodged that same year, the two organisations have fought a battle over the information, which culminated in mediation by the Scottish Information Commissioner this year.

In June the commissioner’s office said the university’s reason for refusing to hand over the information, because the request was considered “vexatious”, was not a correct reason and ordered it to issue another response.

The university has since refused the request because it believes it will cost too much money to process.

Under FOI laws, organisations can refuse to hand over information if it believes it will cost a certain amount, general no more than several hundred pounds.

Prof Gerard Hastings, 57, who co-authored the studies with Prof Linda Bauld, said he was “very angry about it indeed on a number of levels”.

He said it was “deeply concerning they are even trying to get this data” because if the company gained access to the data it would have “enormous implications for academic freedom”.

“First of all it is an abuse of the FOI legislation,” said Prof Hastings who is director of the university’s Centre for Tobacco Control Research.

“I don’t think for a moment that Parliament had this in mind when it created their laws.

“But also these young people shared their inner most secrets about this. They shared their confidences and we explicitly told them that we would treat this data as confidential and that it would be restricted to the research.”

He added: “I am not over-egging this. We are talking about behaviours that they have not told their parents about – they are not supposed to be doing this.

“But also, particular when buying cigarettes, they are (breaking) the law.”

The centre was established in 1999 by Cancer Research UK and aims to discover why children start smoking.

One of the researchers has also received anonymous phone calls trying to discredit her work, though there is no suggestion they are linked to PMI in any way at all.

A University spokesman said all requests made under the FOI Act were treated fairly.

“If we receive a Freedom of Information request we treat it fairly and honestly and respond within the normal time scale,” he said.

In a statement Peter Nixon, Philip Morris’ vice-president of communications confirmed the company had sought information to “understand more about a research project conducted by the University of Stirling regarding plain packaging for cigarettes”.

He said it was an appropriate request to a public institution and that the Scottish Information Commissioner had concluded was not “designed to cause disruption or annoyance to the University”.

“We are not seeking any private or confidential information on any individuals involved with the research,” he said.

“As provided by the freedom of Information Act, confidential and private information concerning individuals should not be disclosed.”

It is not known whether the company will appeal the university’s latest decision.

By By Andrew Hough

This entry was posted in cigarettes businesses and tagged Philip Morris. Bookmark the permalink.