PMA (para-methoxyamphetamine, p-methoxyamphetamine or 4-methoxyamphetamine) is a synthetic phenethylamine drug, psychostimulant and hallucinogen. It is sometimes known by the street names of “death” or “Dr Death”. It has, however, been more commonly encountered when it has been sold as “ecstasy“, even though PMA and MDMA, the principal ingredient of ecstasy, are distinctly different chemicals. PMA is often synthesized from anethole, the flavor compound of anise and fennel, mainly because the starting material for MDMA, safrole, has become less available due to law enforcement action, causing illicit drug manufacturers to use anethole as an alternative. Once thought to be a human invention, recent research suggests PMA occurs as a trace alkaloid in plants including certain Acacia species. 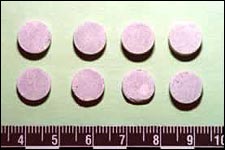