Smoking More than half a pack a day may cause infertility or irregular menstrual cycles in women. 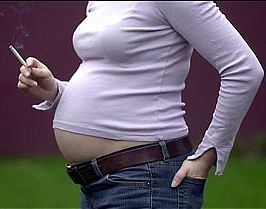 Pregnant women pass any chemicals they take in (from food, tobacco, alcohol and so on) to their unborn children through the placenta.

Women who smoke during pregnancy can slow down the baby’s growth by reducing the amount of oxygen and increasing the amount of carbon monoxide that the baby receives during a critical time when its brain and nervous system are developing.

Babies born of mothers who smoke frequently during pregnancy are on the average 7 ounces lighter than other babies.

Women who smoke have higher risks of giving birth to babies with birth defects or abnormalities.

Mothers who smoke can pass nicotine to their children through breast milk.

Infants born to mothers who smoke are more likely to develop colds, bronchitis, and other respiratory diseases such as asthma. The odds of developing asthma are twice as high among children whose mothers smoke more than 10 cigarettes a day