A group of American University of Beirut researchers found that raising taxes on tobacco products will reduce the incidence of smoking-related diseases, as well as to attract much-needed revenue into the state treasury, AUB press release on Thursday. 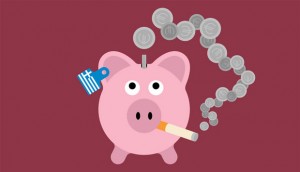 “Raising taxes on tobacco products was the most effective policies to protect youth and to help curb the morbidity and mortality from tobacco,” said Rima Nakkash, associate professor of health promotion and public health, and one of the key personnel in the study.

“Countries such as Turkey, which has a higher rate than smoking Lebanon, failed to adopt strict tobacco control policies, including raising taxes on tobacco products, and we believe that Lebanon could be the next success story, but we need support and close cooperation with the political leadership, in particular, ministries of finance and health to achieve this success, “she added.

Taxes now account for 30 to 50 percent of the retail price significantly lower than average shares of income, who charge 70-80 per cent tax on tobacco products. Given that the average price of imported cigarettes are relatively low in Lebanon ($ 1.6/pack, compared with $ 2.5/pack in the upper middle income and $ 5/pack in high-income countries), research has shown that there are significant opportunities to raise tobacco prices as part of a national strategy for tobacco control to protect the life of the Lebanese people.

Lebanon has ratified the Framework Convention on Tobacco Control in February 2005; there is no national policy that requires an increase in tobacco tax, as stipulated by the Convention. “Today in Lebanon, there has been no studies aimed at providing financial and social effects of higher taxes on tobacco products,” said Jad Chaaban, Assistant Professor of Economics and a leading researcher in the economic study. “Our study focused on the domestic consumption of tobacco products, consisting mainly of imported cigarettes, local cigarettes and pipe tobacco water.”

The study showed that if taxes were increased by about 140 percent on average in local and imported cigarettes, consumption will be reduced by 92 per cent for local cigarettes by 7 per cent on imported cigarettes, and 26 percent of the water pipes. This means that the price of local cigarettes to LBP in 1250 (0.8 U.S. dollars) per pack, while the import of cigarettes and water pipes will be LBP 4750 (3.2 U.S. dollars) per pack, and 4,000 LBP (2,6 USD ) on tobacco packaging, respectively.

“Total expenditure on these goods reached 553 million U.S. dollars in 2010 to U.S. $ 512 million spent on 307 million packs of importehttps://www.tobacco-facts.net/files/2012/04/d cigarettes,” said Nisreen Salti, assistant professor of economics and a member of the study. “Given that the price increase is greater than the fall in consumption, the net income impact on public finances is positive: an increase in tobacco taxes will generate 127 million dollars in additional state revenue, about 52 percent more than today,” said Salti.

“Part of the proceeds from higher taxes may subsequently be targeted national prevention programs for tobacco control and cessation programs, so as to extract more benefits from this scheme of taxation,” said Chaaban. “This is a situation of” win-win “as a life-saving and increase government revenue.”

This entry was posted in cigarettes taxes on tobacco and tagged tobacco taxes. Bookmark the permalink.