The EPA reported the following about Secondhand smoke. 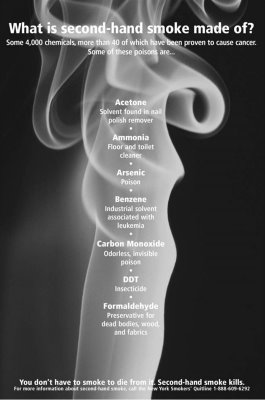 US infants and children under 18 months of age suffer some 150,000 to 300,000 respiratory tract infections (lung diseases such as pneumonia and bronchitis) every year, leading to 7,500 to 15,000 hospitalizations.

Children exposed to secondhand smoke at home are more likely to have middle-ear disease and reduced lung function.

Secondhand smoke contains more than 4,000 chemical compounds, including carbon monoxide ( which poisons the human body), ammonia, formaldehyde, and other poisons. 4 of the chemicals – benzene, 2-naphthylamine, 4-aminobiphenyl, and polonium-210 are classified by the EPA as known carcinogens—cancer causing agents.

Some 2 to 5 million US children suffer from asthma; of these, about 20 percent experience more asthma attacks and more severe attacks than their fellow young asthmatics, due to secondhand smoke.

The EPA has classified secondhand smoke as a carcinogen since 1992.

A study published in the New England Journal of Medicine found that nonsmokers exposed to secondhand smoke were 25 percent more likely to have coronary heart diseases compared to nonsmokers not exposed to smoke.

More than 10 million young people aged 12-18 live in a household with at least one smoker.

According to the EPA, approximately 50-75 percent of children in the United States have detectable levels of cotinine, the breakdown product of nicotine, in their blood.