Snus is a moist powder tobacco product that is consumed by placing it under the upper lip for extended periods of time. It is form of snuff that is used in a manner similar to American dipping tobacco, but typically does not result in the need for spitting. Snus is also unique in that it is steam-cured rather than fire-cured, is not fermented and contains no added sugar. The sale of snus is illegal in the European Union, but due to exemptions, it is still manufactured and consumed primarily in Sweden and Norway. 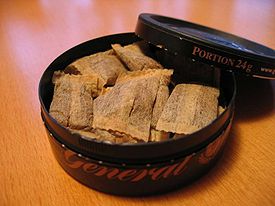 There are two main types of snus on the market:

Swedish snus is made from air dried tobacco from various parts of the world. In earlier times tobacco for making snus used to be laid out for drying in Scania and M?lardalen. Later Kentucky tobaccos were used. The ground tobacco is mixed with water, salt, sodium carbonate and aroma and is prepared through heating, generally via steam. Moist snus contain more than 50% water, and the average use of snus in Sweden is approximately 800 grams (16 units) per person each year. 12% (1.1 million people) of the population in Sweden uses snus. Unlike American-sold oral tobacco, snus has not gone through a fermentation process.

Snus is sold mainly in Sweden and Norway,and is being trialed in South Africa and the United States. It can be found in various places frequented by Scandinavian tourists like Murmansk in Russia (with the notable exception of countries in the EU; see below). It is sold in small tins, which in the earlier years were made of porcelain, wood, silver or gold. At the time of writing, portioned snus usually comes in plastic tins of 24g, while loose snus is mostly sold in compressed paper tins with plastic lids, at 45g (50g before 2008).

The price for the 45g product is approximately ?3-5 in Sweden and ?7.50 in Norway as Norwegian taxes are higher. 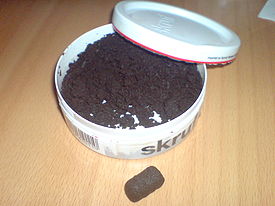 Since snus is not intended nor recommended for inhalation, it does not affect the lungs as cigarettes do, although it does contain more nicotine than cigarettes. Because it is steam-cured, rather than fire-cured like smoking tobacco or other chewing tobacco, it contains lower concentrations of nitrosamines and other carcinogens that form from the partially anaerobic heating of proteins; 2.8 parts per mil for Ettan brand compared to as high as 127.9 parts per mil in American brands, according to a study by the Commonwealth of Massachusetts Department of Health.