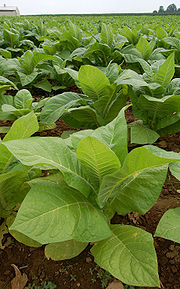 Tobacco is cultivated similar to other agricultural products. Seeds were at first quickly scattered onto the soil. However, young plants came under increasing attack from flea beetles, which caused destruction of half the tobacco crops in United States in 1876. By 1890 successful experiments were conducted that placed the plant in a frame covered by thin fabric. Today, tobacco is sown in cold frames or hotbeds, as their germination is activated by light.

In the United States, tobacco is often fertilized with the mineral apatite, which partially starves the plant of nitrogen to produce a more desired flavor. Apatite, however, contains radium, lead 210, and polonium 210