Smoking may not be good for health but it is certainly good for numerous national economies around the world, and Pakistan is no exception. This article intends to highlight the important role tobacco plays in the economics of the country, nothing more nothing less. 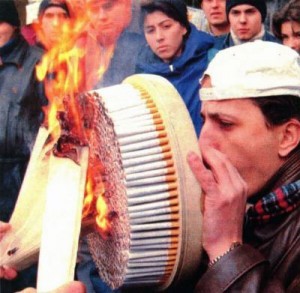 Tobacco industry — growing, manufacturing, distribution and retailing — contributed 4.4 per cent or over Rs 27.5 billion to the total GDP of Pakistan including Rs 15.17 billion, including Rs 14.54 billion in excise duty and sales tax, in 1997. It is the single biggest contributor of excise duty, six-times than that from cotton yarn. Over 5 per cent of all taxes collected in the country comes from the tobacco industry. It employs over one million people directly or indirectly which in terms of full-time equivalent jobs means 312,500 jobs supporting some 1.2 million persons.

Tobacco is the only crop grown in Pakistan whose yield is well above the world average and matches the per hectare yield in the US and other developed countries — an average yield of 1,900 kilograms per hectare. Tobacco industry — growing, manufacturing, distribution and retailing employs over one million persons directly or otherwise. This translates in the full time equivalent of 312,500 jobs supporting approximately 1.2 million persons. Manufacturing employs the highest number of persons — 35 per cent followed by 33 per cent by growing and 32 per cent in distribution and retail.

It is easy to understand the threat of huge revenue loss that presence and easy availability of smuggled cigarettes pose to the economy of Pakistan. The government is losing a substantial revenue of Rs 3 billion from the smuggling of cigarettes into the country. According to Aslam Khaliq, the director consumer and regulatory affairs of Pakistan Tobacco Company, the second top cigarette manufacturer after Lakson Tobacco, the government is losing at least Rs billion every year due to cigarette smuggling. He blamed the high taxation as the singular most important incentive for cigarette smuggling.

Defending the price war started by PTC by slashing the prices of a number of its middle-priced brands early this year, Aslam said that it brought numerous domestic manufacturers in the excise duty and sales tax net. For instance, slashing the prices on some of its brand by 50 per cent from Rs 19 to Rs 9 reduced the excise duty from 63 per cent to 43 per cent with sales tax remaining unchanged at 15 per cent. Despite price reduction, Aslam said, PTC was able to break even due to increased turnover and at the same time forced manufacturers who did not pay excise duty and sales tax in the net to create a level playing field.

Though worried about smuggling and high taxation, Aslam expressed that cigarette prices in Pakistan are on the much low side. He said that the manufacturers should be allowed to increase the prices of their products to better their revenues which are constantly threatened by massive smuggling. He also suggested that price increases would help discourage smoking in the country.

True. Experience in many countries show that each 10 per cent increase in cigarette prices results in a 5 per cent decrease in the numbers of smoking adults and much more in young adults — between 6 to 8 per cent — who have little surplus funds to spend on smoke. However, the argument that high prices discourage smoking is a bit flawed particularly in the context of Pakistan.

Number one, unlike all developed and many developing countries Pakistan choose not to spend even a negligible portion of tobacco taxes on healthcare, research, education, and anti-smoking activities. Such developing countries, not to mention the developed ones, as Nepal and Peru spend a share of cigarette taxes to support cancer research and treatment. Latvia allocates 30 per cent of the revenue which it earns from the tobacco tax on healthcare. Iran earmarks a portion of tobacco tax revenue on healthcare and education.

Secondly, if the manufacturers and policy makers are really serious about reducing smoking in Pakistan through price increases — and no one say that they are — they need to raise taxes on all brands of cigarettes be it locally manufactured — imported. Supporting the domestic tobacco industry against imports, as is the case with Pakistan, may be good for the local industry but negates the very argument that higher prices and taxation discourages smoking.

In 2010, Pakistan witnessed the worst floods since 1974, with one-fifth of the country affected, including the fertile tobacco-producing lands such as the Khyber Pakhtoon Khoah province. In addition, taxation, inflationary trends in other necessities and legislations such as on advertising, reduced volume sales of cigarettes in the country. To make matters worse for the manufacturers, many consumers especially from low-income groups shifted to the illicit products which resulted in reduced sales of legally manufactured brands. Legislation, advertising and strategies

In 2010, legislations were brought about regarding the advertising of cigarettes, placing warnings on cigarette packs, sale of cigarettes to under-age consumers and restrictions on indoor smoking. The manufacturers dealt with this situation very carefully as they adopted strategies to incentivise retailers to promote their brands, increase point-of-sale marketing, and improve distribution strategies. Value versus volume versus oligopoly

Tobacco in Pakistan is value-driven, whereby retail volume sales of cigarettes may have declined, but value sales significantly increased. The tobacco landscape is oligopolistic in nature with Pakistan Tobacco Co Ltd being the biggest player followed by Lakson Tobacco Co Ltd. Most of the volume and value is comprised of economy cigarettes which are primarily driven by low-income consumers. The drop in volume sales was mostly incurred by economy cigarettes, while premium category remained almost unaffected as its consumers belonged to high income groups. The share of cigarettes was maintained by the two largest companies while other small manufacturers and illicit trade also retained a minor share. Legislation versus illicit trade

Tobacco has been a major source of revenue through tax generation, employment, and foreign exchange for Pakistan. The legislations introduced proved to be a threat to retail volumes of manufacturers, although they faced the sensitive situation and increased the value sales significantly due to rise of taxation. Legislations like advertising bands and taxation increased the demand of smuggled brands and despite strict checks allowed room for illicit trade. Challenges versus opportunities over forecast period

While the Tobacco Control Cell (TCC) and Pakistan’s Ministry of Health continue to keep a watch on the implementation of legislations, their execution has been a challenge. However, manufacturers have followed the regulations by placing the pictorial warnings and steering clear of direct advertising. Similarly, hotels, shops and many restaurants have banned indoor smoking. These restrictions along with the floods of 2010 and increased unit prices due to taxation left the retail volume size to shrink considerably. Despite this challenging environment, tobacco in Pakistan is expected to grow over the forecast period. Retail volume as well as value sales are expected to rise by 2015, and additional varieties, innovation and new product developments is likely to be introduced.