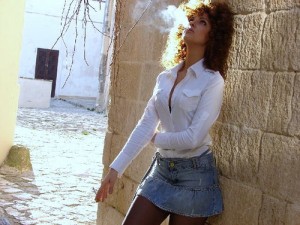 The percentage of Americans who smoke tobacco has fallen dramatically over the past 50 years. In the 1960s, smoking was widely accepted: An estimated 42 percent of Americans were regular smokers. As evidence mounted that tobacco was linked to cancer, heart disease, and other serious health problems, policies were enacted to reduce smoking. Attitudes began to change and the prevalence of smoking gradually diminished.

The U.S. Centers for Disease Control and Prevention (CDC) reports that 22 percent of adult men and 18 percent of adult women were regular smokers in the first half of 2010—nearly one-half the rates of the 1960s.1 Some business analysts see a time—probably around 2046—when smoking will become rare to nonexistent in the United States, with important implications for tobacco companies.2 But smoking is not declining very fast, especially among less-educated, rural, and lower-income Americans. And, many teenagers light up to look cool, lose weight, or fit in with their peers, often establishing a life-long habit.

Smoking Linked to Education and Income

Smoking cigarettes was initially adopted by the upper classes: first among men and then among women. It was a symbol of sophistication and wealth in the first half of the 20th century. The practice eventually spread to the middle and working classes. Just as higher-income Americans were the first to take up the habit, they were the first to embrace the antismoking messages and give it up.3 Today, smoking is more common among those with less education and lower incomes than among the more educated and wealthy. It is more prevalent in small towns and rural areas than in large metropolitan areas.

Educational differences illustrate the socioeconomic gap in smoking prevalence. In 2009, nearly 30 percent of adults with at most a high school education were current smokers compared with 22 percent of those with some college and just 9 percent of those with at least a bachelors’ degree (see Figure 1). An analysis of the educational differences in the 1990s suggests little real decline in the education gap, especially among the white majority, but changes in attitudes and behavior often occur slowly.

Smoking is most prevalent among non-Hispanic whites: 25 percent of white men and 22 percent of white women were regular smokers in 2009. Smoking is less prevalent and has been declining among Hispanics, but this may be partly linked to immigration trends, as more nonsmoking Hispanics enter the country. In 2009, 18 percent of Hispanic men and 9 percent of Hispanic women were smokers. African Americans are almost as likely to smoke as non-Hispanic whites, but smoking has declined among younger African Americans since 1977, pointing to lower overall adult rates in the future.5

Most adult smokers took up the habit in their teens, so the trends in teenage smoking are an important harbinger of future smoking rates. Smoking among teenagers has fluctuated in recent years, which some analysts link to the uneven effectiveness of antismoking policies.6 In 1975, about 37 percent of 12th graders said they had smoked in the previous 30 days. In 2010, just 19 percent said they had smoked in the last month. But the decline has not been smooth and appears to have slowed in recent years (see Figure 2). The trends vary by ethnic group, with rates plummeting for young African Americans and Hispanics, and falling more moderately among whites.

It is not clear why some groups adopt smoking while others don’t, but antismoking advocates point to images and messages that promote smoking, whether they are in actual advertisements or in movies and television.7 A recent study of German teenagers found that “tobacco ads work because companies aim their messages at young people, who are particular[ly] susceptible to even subtle meanings, such as hints that smoking is tied to masculinity, in the case of males, and to thinness, sex appeal, and independence for girls.”

Besides trying to lessen the appeal of smoking for teens, many policies focus on reducing access to cigarettes—such as enforcing the minimum age limits for purchasing a pack (age 18 in most states)—limiting where people can smoke, and making cigarettes more expensive by imposing taxes. Most public buildings and businesses restrict smoking indoors, and fewer businesses have cigarette vending machines that teens can easily access.

Many states add an excise tax to cigarette sales to discourage smoking and to raise revenue to pay for smoking-related health problems. Cigarette excise taxes range from about $0.17 per pack in Missouri to $4.25 in New York, with a state average tax of $1.45.9 A pack of cigarettes costs about $11 in New York, compared with a national average of $4.80. This is a steep price, but the CDC estimates that each pack costs the nation nearly $11 in health expenses and productivity losses.10

While many policies have proved effective in reducing smoking, more than one-fifth of U.S. adults still smoke, and about one-fifth of U.S. 12-graders smoke at least occasionally. Progress has been slow, but the steep declines among some population groups—college graduates, Hispanics, and African American teens—demonstrate that change could happen quickly, bringing us closer to the smoke-free society that business analysts predicted.