Tobacco is an agricultural product processed from the fresh leaves of plants in the genus Nicotiana. It can be consumed, used as an organic pesticide, and in the form of nicotine tartrate it is used in some medicines. In consumption it most commonly appears in the forms of smoking, chewing, snuffing, or dipping tobacco, or snus. Tobacco has long been in use as an entheogen in the Americas. However, upon the arrival of Europeans in North America, it quickly became popularized as a trade item and as a recreational drug. This popularization led to the development of the southern economy of the United States until it gave way to cotton. Following the American Civil War, a change in demand and a change in labor force allowed for the development of the cigarette. This new product quickly led to the growth of tobacco companies until the scientific controversy of the mid-1900s.

There are many species of tobacco, which are all encompassed by the plant genus Nicotiana. The word nicotiana (as well as nicotine) was named in honor of Jean Nicot, French ambassador to Portugal, who in 1559 sent it as a medicine to the court of Catherine de Medici.

Because of the addictive properties of nicotine, tolerance and dependence develop. Absorption quantity, frequency, and speed of tobacco consumption are believed to be directly related to biological strength of nicotine dependence, addiction, and tolerance. The usage of tobacco is an activity that is practiced by some 1.1 billion people, and up to 1/3 of the adult population. The World Health Organization reports it to be the leading preventable cause of death worldwide and estimates that it currently causes 5.4 million deaths per year. Rates of smoking have leveled off or declined in developed countries, however they continue to rise in developing countries.

Tobacco is cultivated similar to other agricultural products. Seeds are sown in cold frames or hotbeds to prevent attacks from insects, and then transplanted into the fields. Tobacco is an annual crop, which is usually harvested in a large single-piece farm equipment. After harvest, tobacco is stored to allow for curing, which allow for the slow oxidation and degradation of carotenoids. This allows for the agricultural product to take on properties that are usually attributed to the “smoothness” of the smoke. Following this, tobacco is packed into its various forms of consumption which include smoking, chewing, sniffing, and so on. 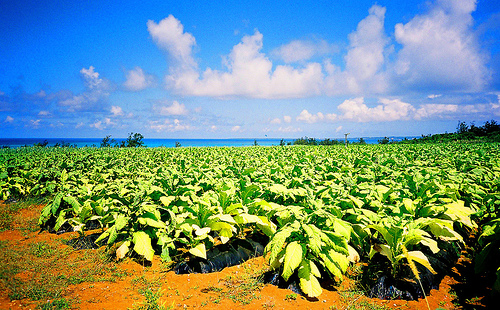 Short-term effects When a person smokes a cigarette, the body responds immediately to the chemical nicotine in the smoke. Nicotine causes a short-term increase in blood pressure, heart rate, and the flow of blood from the heart. It also causes the arteries to narrow. Carbon monoxide reduces the amount of oxygen the blood can carry. This, combined with the effects produced by nicotine, creates an imbalance in the demand for oxygen by the cells and the amount of oxygen the blood is able to supply.

Long-term effects It is now well documented that smoking can cause chronic lung disease, coronary heart disease, and stroke, as well as cancer of the lungs, larynx, esophagus, mouth, and bladder. In addition, smoking is known to contribute to cancer of the cervix, pancreas, and kidneys. Researchers have identified more than 40 chemicals in tobacco smoke that cause cancer in humans and animals. Smokeless tobacco and cigars also have deadly consequences, including lung, larynx, esophageal, and oral cancer. The harmful effects of smoking do not end with the smoker. Women who use tobacco during pregnancy are more likely to have adverse birth outcomes, including babies with low birth weight, which is linked with an increased risk of infant death and with a variety of infant health disorders. The health of nonsmokers is adversely affected by environmental tobacco smoke (ETS). Each year, exposure to ETS causes an estimated 3,000 non-smoking Americans to die of lung cancer and causes up to 300,000 children to suffer from lower respiratory-tract infections. Evidence also indicates that exposure to ETS increases the risk of coronary heart disease.