Why cigarettes are better than hookah? »

Why cigarettes are better than hookah?

Most people think smoking hookah as a safer alternative to other forms of smoking, because hookah smoke is filtered through water before inhaled. But recent studies have shown that smoking a hookah on just as dangerous as smoking cigarettes. 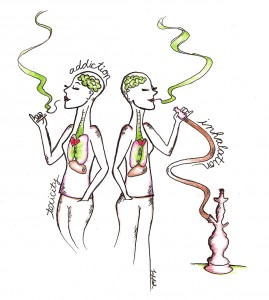 Hookah smoking involves more nicotine than cigarette smoking because of the huge volume of smoke inhaled by smokers while smoking a hookah.

There is a strong belief that the water in the hookah filters out all “bad things” in tobacco smoke, but this is quite a nuisance. A study conducted by the World Health Organization, showed that one hookah session of a few hours can deliver as much smoke into your lungs as 100 cigarettes. In fact, hookah smokers get more smoke than cigarette smokers, and here’s the answer to this question: Cigarette smoke is an uncomfortable hot, when a smoker inhales it deeply. Hookah smoke has been cooled by passing through water. The smoker has to inhale hard to pull the smoke through the hookah. By this the hookah smoke goes deep to the lungs.

What the Study say about Hookah Smoking?

• Studies show that smoking a hookah may be more harmful to health than smoking cigarettes. • Hookah smoke has higher levels of heavy metals and carbon monoxide than cigarette smoke, because of which the coal is burned in the upper part of the tobacco mixture. • 45 minutes of hookah smoking is equivalent to smoking 50 cigarettes tobacco. • It was found that smoking shisha for 45 minutes of consumption equivalent to 20 cigarettes tar tobacco. • The number of cellular chromosomal damage produced inside the mouth, smoking a hookah in the same way as it was in cigarette smoking. • WHO advisory States noted that “water smokers inhale more smoke, resulting in more exposure, cancer-causing chemicals and hazardous gases such as carbon monoxide. … Water supply smokers and secondhand smokers are at risk for the same kinds of diseases that caused by smoking, including cancer, heart disease, respiratory disease and side effects during pregnancy. ” What is the bottom line for hookah smokers who are thinking how best to substitute for smoking cigarettes? Almost every method of making smoking safer is just nonsense. There is only one way to completely reduce the likelihood of fatal diseases caused by smoking is to quit completely.

That hookah smoking causes your health?

American Lung Association (ALA) defines a hookah smoking as a serious health risk. The following are the health risks of smoking hookah: • Lung cancer, oral cancer • Gastric and esophageal cancer • Impaired lung function • Heart Disease • Reduction in fertility • Low birth weight children • Hepatitis or herpes (caused due to the sharing of shisha smokers) The cigarette can last for about 5 minutes, but the usual hookah session lasts for 30 minutes. According to the study, one session of hookah may submit the following: • 36 times the resin production of cigarettes • 1.7 times the nicotine in cigarette production • 8.3 times of carbon monoxide in cigarette • 1 hour hookah session can deliver 50 liters of smoke, while only one cigarette delivers 0.5 liters of smoke What are the dangers of sharing in a hookah smoking? Hookah smokers may use your own mouthpiece during a communal hookah smoking. However, sometimes it happens that they share a mouthpiece. Sharing single mouthpieces can spread diseases such as herpes, hepatitis and tuberculosis. Hookah smoking is not harmless form of smoking. This can be as dangerous as cigarettes. Long-term effects of hookah smoking will be increased dependence. Some young people who innocently try hookah, as a safe means of smoking, may become dependent. They can also switch to cigarettes, as they can carry with them easily. All this proves that smoking a hookah may not be dismissed as a safe alternative. Thus, it always helps to stay away from the hookah.